Assessing the environmental impacts that are associated with the manufacture and use of construction materials, over their life cycle, has been of interest to the construction industry since the early 1990s.

Assessing the environmental impacts that are associated with the manufacture and use of construction materials, over their life cycle, has been of interest to the construction industry since the early 1990s. This was largely driven by property owners who had become increasingly aware of environmental issues and recognised the important connection with buildings.

In order to respond to the growing interest from building owners and specifiers, organisations started to provide environmental data associated with the manufacture of construction products. An early example of this, in the UK, was the Green Guide to Specification, which contained environmental profiles for a range of different construction materials. This provided ratings for different products based upon a life cycle assessment (LCA).

LCA was recognised as the best tool for assessing the environmental impacts of products because it not only took into account the impacts associated with manufacture of the product but also considered the complete supply chain from raw material extraction through to installation, as well as maintenance and finally impacts associated with end-of-life; including aspects such as recycling or reuse.

Tata Steel was an early adopter of LCA as a means of quantifying the environmental impact of construction products and produced a number of environmental declarations for steel cladding panels in 2008. The data contained in these declarations were based on an LCA study that was conducted in conformance with international standards on LCA (the ISO 14040 series of standards).

As interest has grown in understanding the environmental impacts of buildings, particularly with the evolution of green building assessment schemes such as LEED and BREEAM, there has been a move towards further standardisation of life cycle based methods for evaluating and declaring the environmental impacts of products. In the construction sector, it became apparent that there were significant differences between declarations, and in particular the way the information was being communicated. This led to the development of a European standard, EN 15804, which was first published in 2012 and set out the core product category rules for producing environmental product declarations for construction products. Product category rules are a key element in creating a declaration, for a certain type of product, and describe the specific requirements for creating a Type III environmental declaration, commonly known as an EPD, in accordance with ISO 14025:2006.

The benefits of module classification in EN 15804

One of the features of EN 15804 is that it classifies the different life cycle stages in terms of modules. Modules covering manufacture, installation, use and end-of-life were introduced with the intention of improving transparency through the use of a common reporting template. This made it clearer as to whether aspects relating to stages such as installation or end-of-life had been considered within the EPD. The ability to quantify the environmental benefits of recovering, recycling and reusing materials at end-of-life was also recognised as a key factor in determining life cycle environmental performance, and this was incorporated into one of the life cycle stages, which is known as Module D.

Today it is considered good practice to produce EPDs for construction products in accordance with EN 15804, the European Standard for EPD, or ISO 21930, which is the related International Standard. In parallel to the standardisation work on EPDs, the European Commission have also been developing a common methodology for assessing the environmental impacts of products sold in Europe. This initiative is known as Product Environmental Footprint (PEF), and the PEF methods can be used to produce a declaration in a similar manner to an EPD but with some differences in approach.

In order to more closely align EN 15804 with the methods developed within PEF, the European Technical Committee CEN/TC 350, which developed EN 15804, amended the standard and on 30th October 2019, CEN/TC 350 published the new standard EN 15804:2012+A2:2019 ‘Sustainability of construction works - Environmental product declarations - Core rules for the product category of construction products’. One of the key amendments to the standard was to require the mandatory reporting of Module D, as the earlier version of the standard stated that the reporting of Module D was optional. A mandatory Module D is also much more aligned with the principals of life cycle thinking, as set out in the International Standards on LCA.

Now that the new version of EN 15804 has been published, the mandatory reporting of Module D will further improve transparency and enable specifiers to quantify the benefits and impacts associated with designing for recycling and reuse - an increasingly important feature of transitioning to a circular economy and eliminating waste. Within Tata Steel’s own EPDs, Module D and the impacts associated with end-of-life disassembly, collection, transport and disposal (Module C), are declared and reported separately in accordance with EN 15804.

Looking to the future, the trend is towards storing EPD information digitally and providing product specific data, such that it can be incorporated into full building LCA models. Within our own EPD development work we have made the decision to make use of EPD tools which allow the generation of bespoke EPDs that can be for a specific product or system. For example, we can now produce an EPD for a specific cladding panel system, rather than the average of a number of different systems, and store this information in an electronic format rather than creating a static document. This also opens up opportunities for sharing information in the supply chain.

EPD data also has the potential to feed into digital platforms such as Buildings Material Passports (BMP) and Buildings Information Modelling (BIM), both of which are becoming widely used through the design, manufacture, and operation of a building. This data can also be used in the future when reviewing a product’s suitability for reuse. New initiatives in the sector are also seeking to integrate environmental information (such as EPDs) about construction products into BIM, so that choices can be made on environmental criteria as well as other data.

This raises some challenges in terms of standardisation, as a common method for sharing EPD data will be required. Work has already started on developing standards, at an international level, and this will enable the wider use of LCA as a means of quantifying the environmental impacts of buildings. 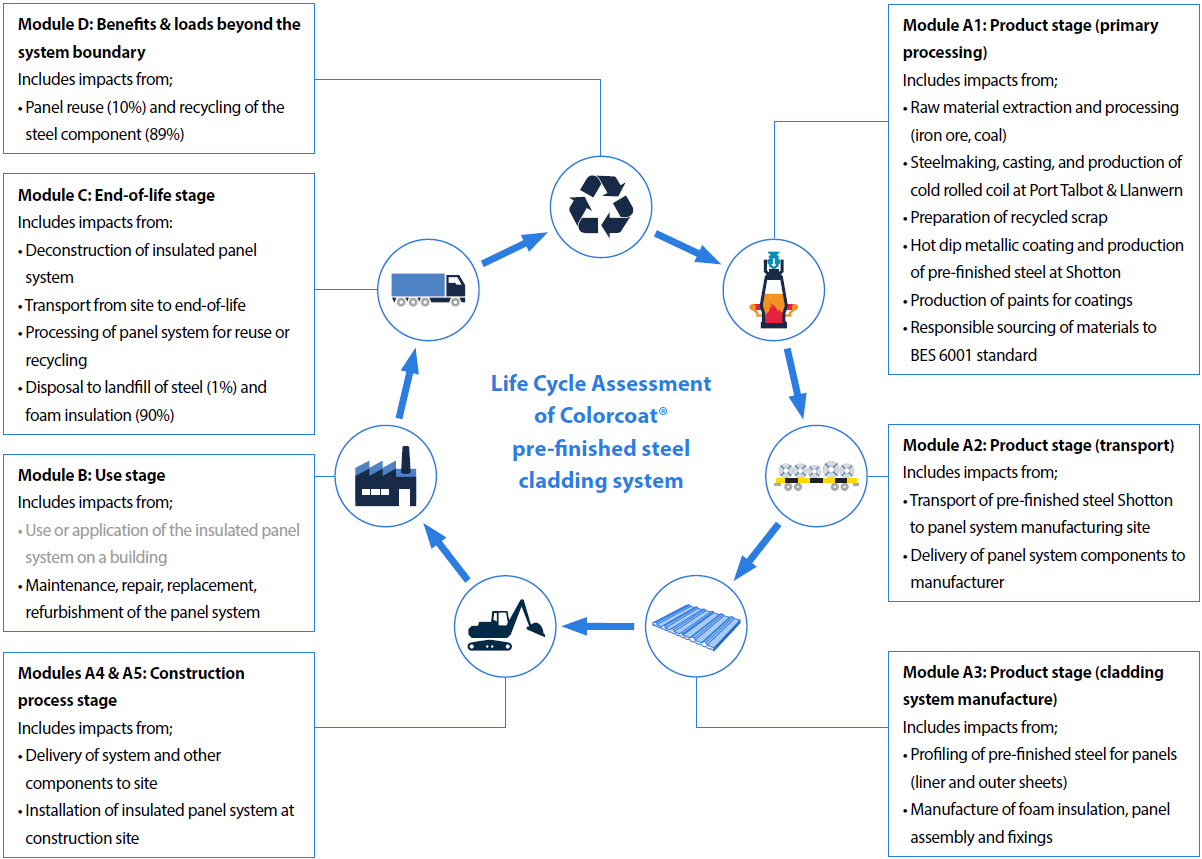 The life cycle stages of a foam insulated panel system manufactured using Colorcoat® pre-finished steel and how these relate to the modules described in EN 15804.

For all enquiries regarding Tata Steel's sustainability products, services and initiatives contact us today
barry.rust@tatasteeleurope.com
+44 (0)1536 404206