Such is the trajectory of The Forge – a new office development just behind the Tate Modern, developed by Land Securities 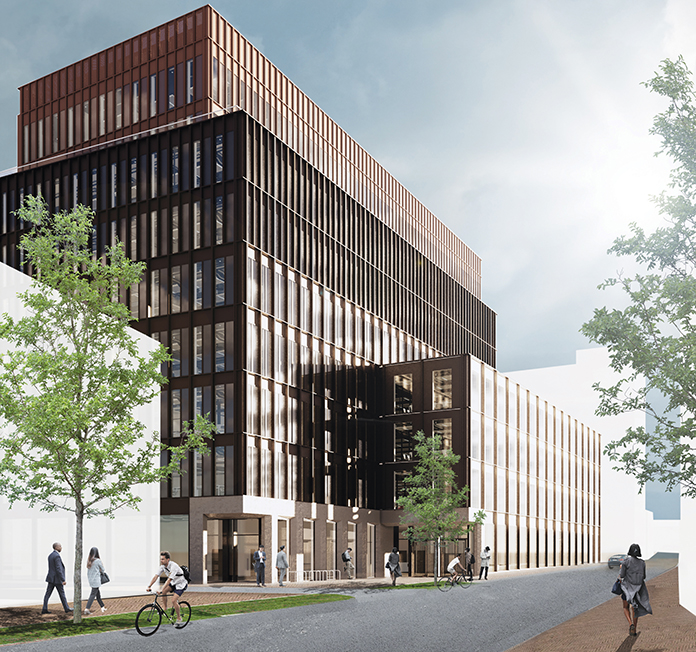 Ideas are powerful things. They have a life of their own and persist – first in the mind of the originator - and then, like so much pollen, to go on to fertilise the imaginations of those touched by the original.

Such is the trajectory of The Forge – a new office development just behind the Tate Modern, developed by Land Securities

Why this flowery language about ideas? Because this building is the realisation of a concept which has taken over 20 years to come to fruition, with many false starts and disappointments along the way. But if one key phrase can be applied to this project it is the persistence of an idea.

The Forge – formerly 105 Sumner Street - is a development of two nine-story buildings, (Phosphor and Bronze) which use platform construction to maximise the productivity benefits that can be gained from adopting manufacturing methodologies. The Design for Manufacture and Assembly (DfMA) revolution has been written about in much depth. What is new for a company like Tata Steel is our engagement with the construction supply chain is now more direct, more customer oriented and more relevant to the processes of us as a maker of components, the designer as utiliser of our products and the client as the beneficiary of the efficiencies available by shortening the ‘chain of custody’ from product to completed project. We should also consider the ultimate end user as benefitting from a better performing building.

On The Forge project, we are part of the team looking at the development of a structural platform system for offices. The design concept by Bryden Wood Technology Ltd. who have been in the vanguard of the systemisation of construction for nearly thirty years. This is where persistence is important, not everything happens at once; especially in an industry like construction where every project is treated as a unique set of circumstances and nothing is ever the same, even when it is.

A much used, (but typically pithy analogy) is the ‘Car in a field’. i.e. would you buy a car that had been built in a field by itinerant groups of – albeit specialist – workers, brought together for that one specific vehicle, and then disbanded, only to form again, in different teams with different suppliers and organised slightly differently on the next ‘car in a field’? The obvious rejoinder to this is that cars are not built in fields, and factories are controllable environments whereas fields aren’t. Why not then, maximise the controllable aspects of a construction project?

Land Securities’ internal name for this initiative to create a componentised office product is ‘Office 1.0’, signifying a fresh start and a new baseline. It uses a Platform-Design for Manufacture and Assembly (P-DfMA) structure formed from a standardised steel frame set out on an optimised office grid. Significantly this is all pre-fabricated and stitched together with in situ concrete slabs replicated floor by floor using re-usable casting tables. Where automation can be introduced to the site it is.

The new approach has been identified by the government as essential to the transformation of the construction sector.

A key component in the system is the ComFlor beam – an element that utilises Tata Steel’s ComFlor 210 profile in an inverted orientation, fitted with a reinforcing cage and installed dry with reusable props before the concreting phase.

The Forge is a commercial test bed for the methodology and newly developed components. Like the idea that came before, it will need to prove platform design to be resilient and tough enough to survive and flourish in a post-Covid world - like phosphorous and bronze, which when combined are stronger than the sum of their parts.