Skip to main content
Blog
What tests are used to measure the fire performance of steel cladding systems and how do they measure up in real life?

At Tata Steel we use LPCB and FM Approvals for the best independent assessment for the applications (building types) that our products go into.

Construction products and materials that come from a traceable, reputable and consistent supply chain offer much greater certainty in terms of their performance. They are therefore less risky to specify, and tend to benefit from more comprehensive testing and guarantees.  But what kind of tests are used to measure fire performance of building envelope systems, and how do they measure up in real life situations?

The first consideration is that the tests must of course be independent.  At Tata Steel we use LPCB and FM Approvals for the best independent assessment for the applications (building types) that our products go into.

The Loss Prevention Certification Board (LPCB), which is part of BRE Global, has been working with industry and insurers for more than 100 years to set the standards needed to ensure that fire and security products and services perform effectively.

All fire and security products, services and companies certificated by LPCB to LPS and other industry standards are listed in the ‘RedBook’. These listings can be downloaded free of charge from RedBookLive.com.

FM Approvals is an international leader in third-party testing and certification services. They test property loss prevention products and services - for use in commercial and industrial facilities - to verify that they meet rigorous loss prevention standards of quality, technical integrity and performance. The FM APPROVED mark is recognised worldwide.

EPIC, of which Tata Steel is a member, is a not-for-profit trade association established in 1991 to represent the PIR insulated panel industry in the UK. It is a major contributor to UK and European consultative groups and projects, particularly in the areas of regulatory requirements, design, energy conservation, sustainability, fire regulation, waste and end-of-life analysis. It is also the main dissemination service for all issues relating to insulated panel use in construction.

As an industry trade body, EPIC actively participates in the development of various BS and EN/ISO standards and regulations, whilst also working with stakeholders to develop best practice techniques and guides.

Since its’ establishment, EPIC has carried out extensive fire performance testing on its members panel products, including those of Tata Steel. Large-scale fire tests are important as they indicate likely performance of a system in the developing stage of a fire. The EPIC fire research programme tested panels designed for external use in roof and wall applications. The test method used was the LPS 1181 large room test (described in LPS 1181 Part 1) and was authenticated by independent bodies and conducted strictly in accordance with established standards. Full details about LPS 1181 can be found on the RedBook Live website.

How do PIR insulated panels perform in real life?

In addition to fire research work, EPIC has also compiled a series of case studies that analysed the performance of PIR insulated panels in actual building fires, with particular emphasis on fire spread and contribution to the fire. In all cases, the PIR core panels were found to have performed beyond their specification, with no evidence of contribution to fire spread.

Two of the case studies are reproduced below (others can be found here). The first (Clifton Comprehensive School) focusses on whether there was any fire spread, or significant contribution to the fire, and assesses the performance of panels either side of a fire-resisting compartment wall. The second (Eagle Global Logistics) analyses the performance of panels from external fire attack.

At the time of the fire, the construction of Clifton Comprehensive School in Rotherham had just been completed. A significant quantity of equipment (computers and laboratory equipment, etc.) had been installed, but the building was not yet in use by the school. The roof of the building was constructed of PIR insulated roof panels. 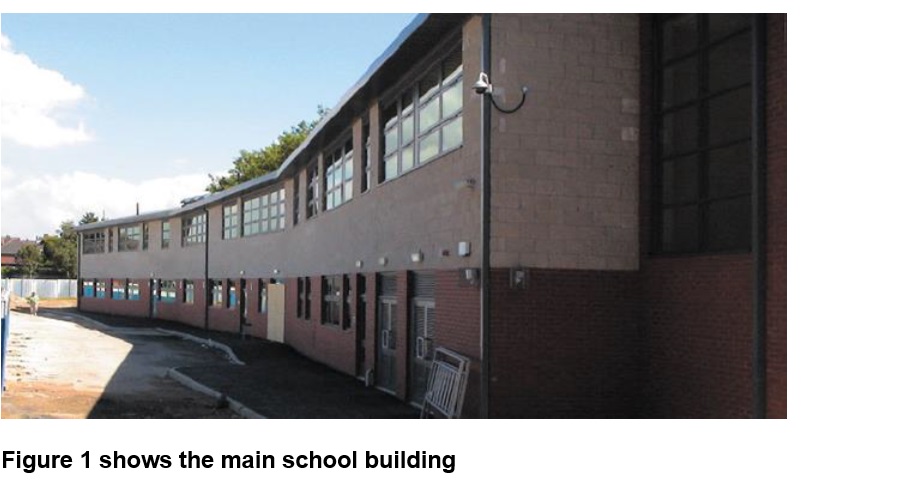 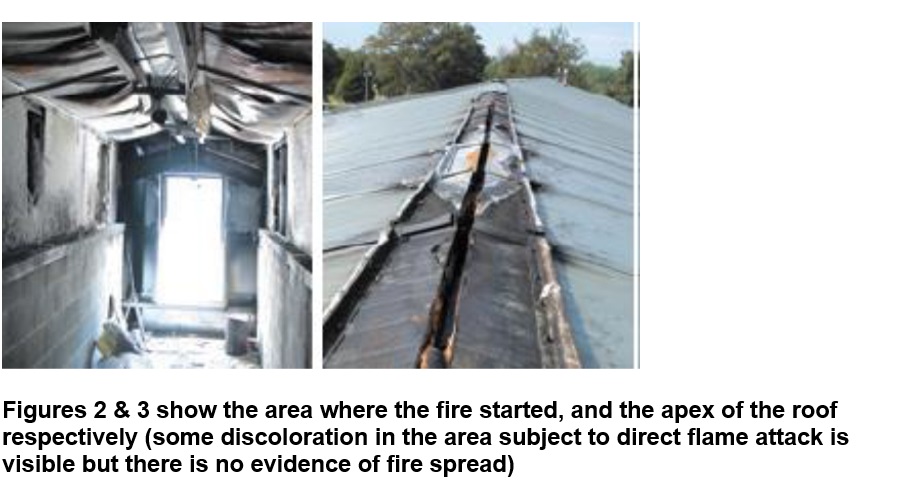 The fire started in an enclosed passageway linking two open air plant areas on the roof. There was scaffolding at the rear of the premises which gave access to the roof and the fire was thought to have been caused by the accidental or malicious ignition of roof sealant.

Figure 2 shows the empty drum thought to have contained the roof sealant, and holes made in the partition system by the fire service to check that the fire had been completely extinguished.

The plastic and glass components of the fire alarm and light fittings had shattered/melted and although delamination of the inner skin of the insulated panels occurred, the core and outer skin remained undistorted. The deformation of the purlins immediately above the seat of the fire indicated that this was a very hot fire.

The classrooms were separated from the passageway by compartment walls. The fire did not spread to the classrooms and fire fighters observed only light smoke in some of these rooms. There was no indication of any heat or smoke migration through the insulation of the roofing sheets and the fire service commented that the roofing panels did not contribute to the fire spread.

The fire originated in a large logistics warehouse occupied by Eagle Global Logistics (EGL) in Thurrock, which contained mixed goods stacked on the floor and on high bay racking.

Another warehouse was situated adjacent to EGL (approximately 9 metres away) and the walls and roof of both buildings were clad in PIR insulated panels.

The fire started in the south end of the building and burned for two days and two nights, and it is clear from the images shown in Figures 1 & 2 that the fire was very severe.

Despite the duration and severity of the fire, significant areas of insulated cladding panels remained with only limited damage to core material, indicating that the PIR core material did not promote fire spread. 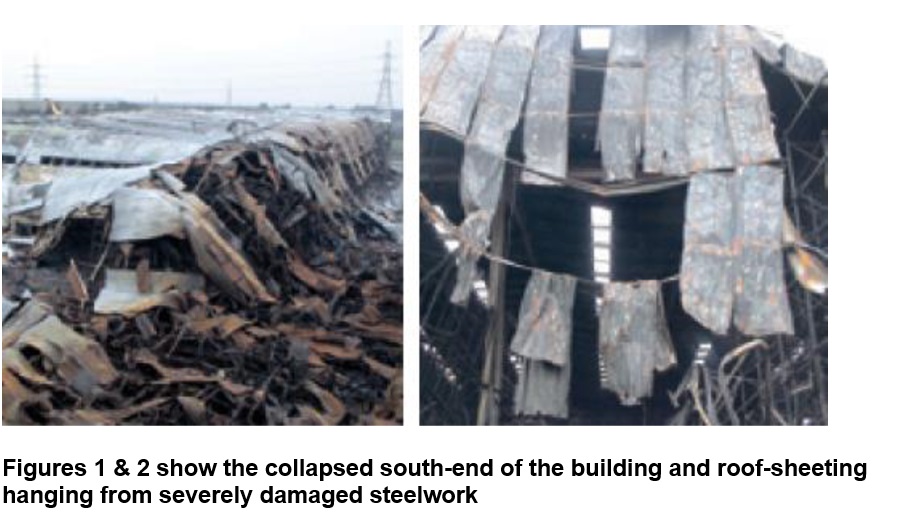 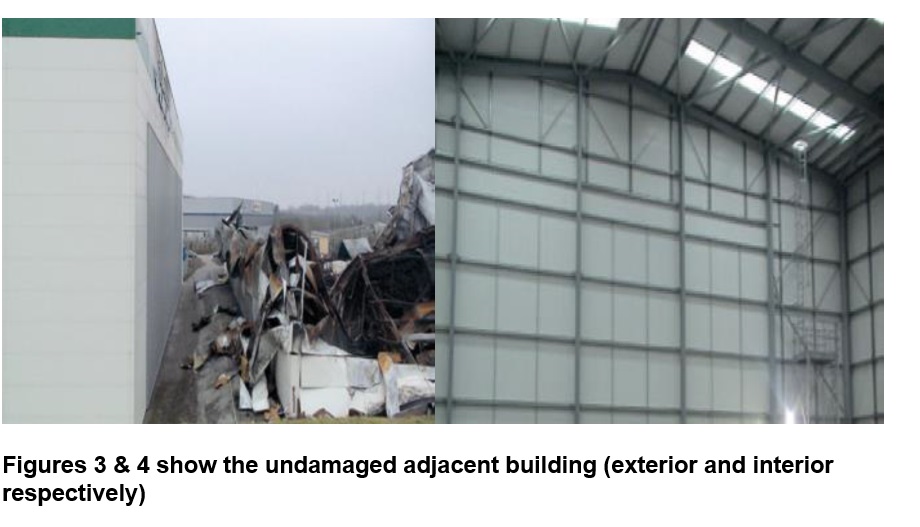 Full details about EPIC, including fire guidance information, product fire testing and further case studies, can be found on their website.

If you are interested in fire related blogs, find out more about how August 2019 amendments to ADB2 affect cladding choice or how you can ensure the ‘Golden Thread’ to your project is not broken.