Tata Steel: at the heart of the community

The Deeside community now has access to a fully-registered Automatic External Defibrillator (AED) thanks to a donation by Tata Steel in Shotton.

Jamie Richards, Chief Executive of AEDdonate—a charity committed to improving the survival rate from out-of-hospital cardiac arrests—explained: “In an emergency, every minute matters. We work with partners to install publicly-accessible AEDs in locked cabinets, which are registered with the Welsh Ambulance Service.

“If someone suffers a sudden cardiac arrest (SCA), the emergency services can then direct a member of the public to the nearest defibrillator, which could be life-saving.

Jamie continued: “This is the first one we have installed in Deeside Industrial Park thanks to the donation by Tata Steel.”

The AED is located on the roundabout to Zone 2 of the Deeside Industrial Park, by the main Service Station.

Tata Steel’s Works Manager at Shotton, Bill Duckworth, said: “Flintshire County Council were looking to increase the number and visibility of AEDs in the Deeside Industrial Park, and asked if local employers could support the scheme.

“It was music to our ears - it’s of real benefit to the local community and something we wholeheartedly wanted to support – both in terms of funding and in raising awareness of the importance of accessible AEDs in our local community.

“We have been using defibrillators here at Shotton Works for over ten years and have over 20 across the site.”

Commenting on the donation, Flintshire’s Cabinet Member for Climate Change and Economy, Councillor David Healey, said: “I am pleased that Flintshire County Council has been instrumental in making it possible to install AEDs on Deeside Industrial Park.  It is so important for people to have access to these lifesaving defibrillators. Working with partners on the Flintshire Safety Group, our officers have identified where to place them and I’m delighted to see the first one in situ, with a further three due to be located very soon.”

Jamie added: “A big thank you to Tata Steel for its generous donation, not only on behalf of AEDdonate but, more importantly, on behalf of the local community in which Tata Steel operates.” 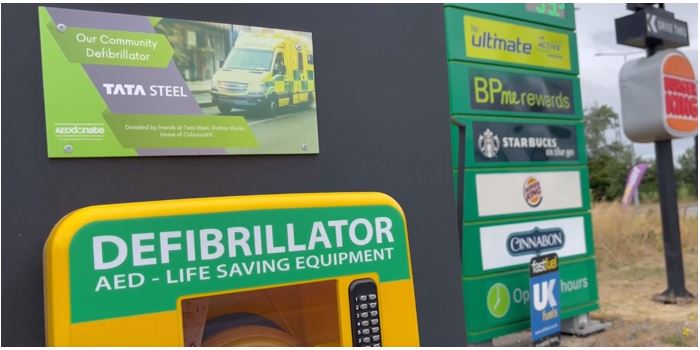